The horrific mass shooting earlier this year wasn’t the mere action of a madman. Issues such as inequality and poverty were triggers. Indonesia should take note.

The drama of a mass shooting carried out by a rogue Thai Army soldier ended on Sunday, February 9. After 16 hours of chaos, the culprit, Jakrapanth Thomma, was finally shot dead by the police. The shooting, which left 29 people dead and dozens of others wounded, deserves our attention because there are issues of dispute and corruption that emerged behind that unfortunate event.

As acknowledged by the Thai military commander, Gen Apirat Kongsompong, at a press conference, the military is investigating Col Anantharot Krasae, the shooter’s commander and first victim of the rampage, in connection with fraud and land disputes involving the shooter. Apirat said the commander had taken advantage of Jakrapanth in a land agreement. Before carrying out the shooting, Jakrapanth uploaded information alluding to wealth and greed on his social media accounts.

Although on paper, fighting corruption is one of the focuses of the Thai government, the country’s new Constitution has given the military regime enormous powers, thereby curtailing democratic freedoms and independent supervision of government performance. That is why Thailand’s Corruption Perceptions Index, compiled by International Transparency, tends to be stagnant. In the past three years, Thailand's CPI scores were only 37 (2017), 36 (2018) and 36 (2019) out of 100.

One of the contributors to the low index scores was corruption in Thailand’s public sector, including in land administration. This has been made worse by corruption in the judiciary. According to the Bertelsmann Foundation Transformation Index (BTI), even though Thailand has an anticorruption program, its enforcement varies greatly, where high-level corruption cases are never truly resolved under the law. In fact, prior to the 2014 military coup, Thailand had a constitutionally independent judiciary. However, under the military junta, the judiciary has been controlled by political interests, so that it no longer functions as a watchdog of the executive branch. As acknowledged by the National Anti-Corruption Commission – Thailand’s version of Indonesia’s Corruption Eradication Commission – the public sector is still riddled with collusion and corruption, where cases of abuse of power, double standards and interventions against independent organizations are easily found.

So, what does all of this have to do with the recent shooting carried out by a Thai soldier?

I agree with a Human Rights Watch official, as quoted by The New York Times, who said the incident should not be seen as an isolated dispute between Jakrapanth and his superior, Anantharot. The case must also be seen from a wider perspective. I call it a structural perspective, which sees a problem based on its relationship with a number of social, economic and political factors at once. That's where the issue of corruption sticks out. Corruption, as well as widespread abuse of power, can make people feel frustrated. Coupled with economic pressures, frustration can erupt into anything, including brutal violence, as happened in Thailand.

On the other hand, the level of economic inequality in Thailand is also quite worrying. Two years ago, according to data from the 2018 Global Wealth Report released by Credit Suisse, Thailand had the worst wealth inequality in the world. The richest 1 percent in Thailand controls 66.9 percent of the country’s total wealth. This figure is worse than Russia (57.1 percent), Turkey (54.4 percent) and India (51.5 percent). In 2016, Thailand ranked third after Russia and India.

If we refer to a number of studies, such as Elise Must (2016) or Klaus Abbink, et al (2008), inequality is strongly related to the emergence of conflict and social tensions, including in triggering riots. That is why the greed of a handful of people or a certain group of people cannot be considered a mere personal matter, because it could trigger widespread conflict. That is why the shooting in Thailand needs to be seen from a wider view.

For the record, although the mass shooting was a first in Thailand, and maybe in Southeast Asia, it was not the first armed action there. In October 2019, for example, a judge in a court in southern Thailand shot himself in a packed courtroom during a trial. Before trying to kill himself, he had acquitted several murder suspects and then railed against the Thai justice system. He survived the shooting. Thus, the idea of social frustration being behind such events cannot be ignored.

If we use the same lens, we in Indonesia should be wary of similar incidents. The level of inequality in Indonesia, for example, is not far behind Thailand. According to the 2018 Credit Suisse survey, 1 percent of the richest people in Indonesia controlled 46.6 percent of national wealth. This figure was an increase from the previous year, which was 45.4 percent. With such a large wealth gap, Indonesia's position in the 2018 survey was fifth globally, after Thailand, Russia, Turkey and India.

The issue of corruption came up again at the end of last year. The perceived weakening of the anti-corruption body, the KPK, by creating an oversight body was met with a wave of large-scale demonstrations titled “Corruption Reform” by students. Even though the demonstrations ended, the people, I think, are disgruntled and continue to watch. There have since been a number of major corruption cases involving state-owned companies, including Jiwasraya and Asabri.

Regarding the mass shooting in Thailand, the issues of inequality, injustice and corruption indeed cannot be seen only through a single lens. The risks from these issues are always more complex than the initial problems. The World Bank itself has warned that widening income inequality in Indonesia in the past 15 years, for example, is risky because it causes social tensions. Given Indonesia’s ethnic and religious diversity, the risks we face are multiplied.

Facing these risks, the government must be careful in formulating policies. Any policy that has the potential to increase inequality, or diminish the sense of public justice, should not be implemented because it will only increase the risk of future conflict.

However, it is precisely in these matters that I fear the government is taking reckless steps. The omnibus bill on job creation that was initiated by the government, for example, which has provoked a strong reaction among workers, was from the beginning seen as a potential source of turmoil for the people. On the one hand, the government involved many entrepreneurs in the drafting of the bill, but on the other hand the workers who would also be affected were marginalized or ignored. That is clearly not good conflict management. Early on, the government actually invited potential conflict.

On the other hand, I see the government’s approach to reducing conflict triggered by inequality and injustice is not much different than during President Soeharto’s New Order regime. We remember, in 1978, when the Indonesian Gini coefficient reached 0.38, which was its highest record of economic inequality, thus increasing dissatisfaction and a decline in confidence in the government. The New Order responded by launching the P4 program on practicing the nationalistic state ideology of Pancasila. The structural issues of inequality and injustice, which should have been addressed through technocratic policies, were instead responded to with ideological projects. The potential for conflict was not addressed by creating fairer economic policies or a development strategy that empowered communities (not just increasing the economic pie of the elite), but was instead suppressed by Pancasila. As a result, all voices critical of the government were labeled unpatriotic and attempts to undermine the country.

In 2010, when the inequality index reached 0.41, which is the worst number in Indonesian history, the government of Susilo Bambang Yudhoyono did something similar to what was done by the New Order, establishing a presidential working unit on Pancasila.

I see a common pattern here. In the midst of inequality, people were forced to listen to government policies about tolerance. Indonesia actually has more credit than Thailand. Although both have been saddled by military regimes, now Indonesia is a democracy. According to the Democracy Index compiled by the Economist Intelligence Unit, in 2019 Indonesia ranked 64 out of 167 countries. Within Southeast Asia, Indonesia's position is still above Thailand (68) and Singapore (75), but lower than Malaysia (43) and the Philippines (54).

After the reformasi era, Indonesian generals who still had an interest in politics no longer used the military as their political vehicle. They plunged into politics through the path of democracy, namely by retiring from the military and then establishing political parties to contest free and fair elections. Former general Yudhoyono, for example, who served two terms as president, established the Democratic Party. Likewise with former general Wiranto, chairman of the Presidential Advisory Council, who founded the Hanura Party. Or Prabowo Subianto, another retired general who is now the minister of defense, who also plunged into politics by establishing the Gerindra Party.

That is a good precedent in the process of democratization in Indonesia, which marks the Indonesian military's commitment to democracy. This is also what differentiates us from Thailand. When I first wrote about Thailand in the Salemba Weekly in the mid-1970s, when I was in college, I could not imagine replacing the military-backed New Order regime with a democratic civilian regime.

Of course, it must be honestly recognized that the effort was not merely the work of civil society. It was impossible for Indonesia to smoothly end the New Order regime without the support of reformist military figures within it. Right there, we are better than Thailand. Nicholas Farrelly (2013) sees that what is happening in Thailand today is an example of the failure of its elites to consolidate democracy.

The question, then, is this: although democratically our position is better, can Indonesia overcome corruption and inequality better than Thailand? 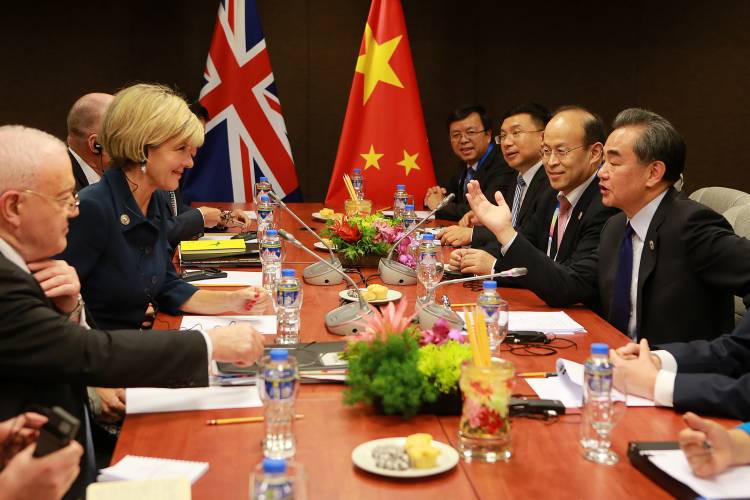 There is no viable alternative to Australia engaging with China. Canberra really has no other choice. That said, neither does Beijing.

The dark side of AI: Biases and a new geopolitical battle

The letters AI (artificial intelligence) strike fear into the hearts of some with the specter of a robot takeover of jobs, while many...

AI and the return of great-power competition

A trend toward economic nationalism and a growing battle over international standards will balkanize the tech sector as the world’s...